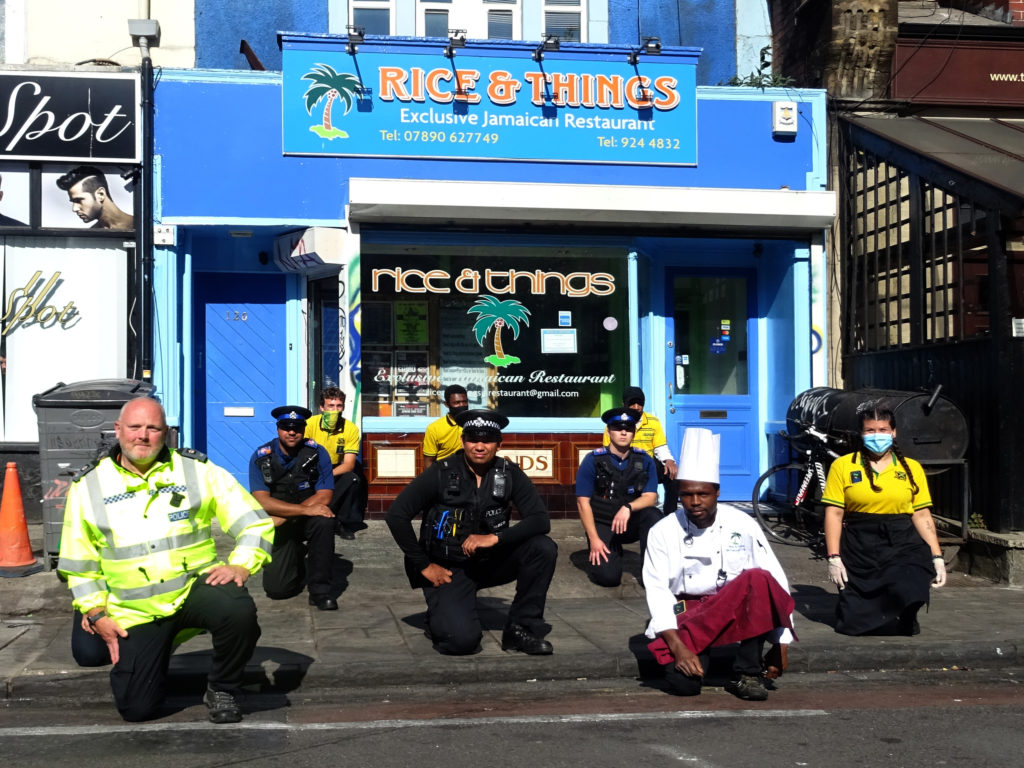 Rice & Things would like to thank Avon & Somerset Constabulary for showing their support and solidarity for the Black Lives Matter movement, following the tragic death of George Floyd, which has sparked protests across the USA

Rice and Things’ director Chef invited Bristol Police to Take The Knee in solidarity with the anti racism protests that will be taking place in Bristol on Sunday 7th June.

Supt Andy Bennett expressed the police’s wish that the racism that has led to the protests should never happen in Bristol, and that they wanted to show their support for the cause of justice and equality.

“Rice and Things stands in solidarity with all of our Black Brothers and Sisters across the globe at this crucial time in our history. In working towards stamping out this dangerous, evil that lives among us called racism, we symbolically take the knee in show of our support for this evil to be eradicated, with no stone left unturned.

We take the knee alongside Avon and Somerset Police Constabulary. There is a reason for this. Let me be clear. There is a vote of thanks we give to the Force not just in terms of what is happening now, but with regard to the journey of anti-racism that they have been on.

With specific reference to current Chief Constable Andy Marsh, Chief Superintendent Andy Bennett, and paying tribute to former Chief Constable Colin Port, I pay tribute to them, as over the years they have shown both vulnerability and humility in their attempts to eliminate racial inequality within their workforce, and in the ways that their officers execute their duties. It has not been easy. They have implemented change and are still looking for ways to try to eradicate racism from the within the organisation, out.

Chief Constable Andy Marsh has done an exceptional job in the way he has gone about creating the balance of closing the gap both within the constabulary, and within the communities that he serves across Bristol. It is not something to take lightly. As we face the stark realities of the impact of structural racism, it is fitting to acknowledge where work is being done. So we thank him for his support, and the officers who stand against racial injustices and inequality. As we work together our aim is to get this monster under control.

Finally, and most importantly, I want to remind our Black Brothers and Sisters across the globe, that as we campaign for change, the real change has to come from within. We need to stop killing and hurting each other senselessly. And in the same way we stand in solidarity against the senseless police brutality against our communities, we need to stand in solidarity against the senseless, needless implosion of self-hate, territorial nonsense, and a misplaced sense of “respect” which leads to the loss of life. We here, in Bristol, have seen our children 14 years an upwards facing years in prison through senseless murders they have committed. Our first step is that we have to start to clean house, working together in unity and caring for each other; as the old adage says, united we stand, divided we fall. Let us choose to fall together, as we stand together for change.

We are in pain for George Floyd, for systematic oppression everywhere, the extremes we see where the only “weapon of ammunition” for deadly force we possess is a packet of sweets! (Trayvon Martin shooting, Florida).

We also weep for the losses we create within our own communities by our own hands.

May the souls of our slain rest in peace. But those of us with breath, may we continue to campaign for the justice that we deserve. I call to action every organisation who is willing to work towards sustainable change, stamping out the evils of inequality and injustice, so that we are able, step by step creating something different.

I am a man, a Black man, raising Black men, responsible for Black men in my employ. I pledge to fight until there is nothing left to fight.”